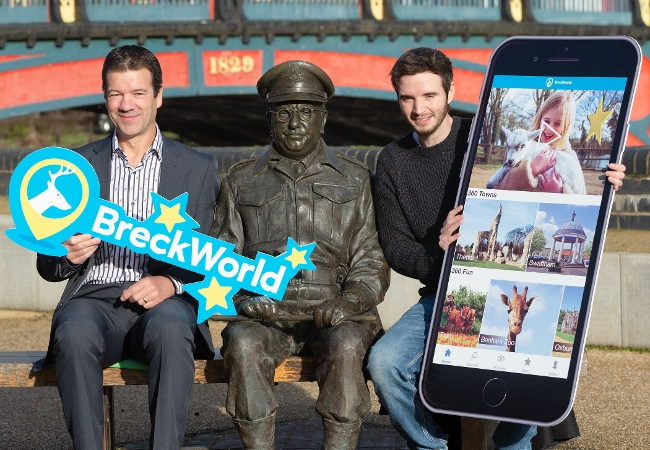 A brand new app which is backed by Stephen Fry has been launched by a district council to help people uncover some of the best local attractions.

The Breckworld app is thought to be a world first, bringing together existing and newly developed technology into a single app. It extensively features ultra-high-definition 360° videos, some of which are narrated by Stephen Fry, so people can virtually explore Breckland's towns, attractions, free days out and independent cafes.

People can also take part in a virtual treasure hunt which is designed to help families and visitors make the most of their visit while unlocking special offers along the way.

Cllr William Nunn, Breckland Council's Leader, said: "Breckworld enables residents and visitors to make an informed choice about where they'd like to visit by watching short 360 degree films of over 70 different local attractions from the comfort of their own homes. The app also lets you take part in a virtual treasure hunt while you're exploring some of our best known attractions as well as the district's hidden gems. The treasure hunt is great fun but collecting hidden stars will also unlock discount offers so people can save money on a future visit to one of the district's attractions, which is sure to come in handy during the upcoming half-term and throughout the year."

There are more than 100 virtual stars hidden across the district's attractions and high streets and can be located using a map within the Breckworld app. For every 10 stars people collect, they can choose one of a number of discounts which have been provided by local attractions. In addition, special offers will also appear when using the app, such as free cake when you buy a coffee in a local independent café, which is designed to support local eateries and encourage visitors into the towns.

The app has delivered in partnership between Breckland Council and Ryan Baxter's Viewing Online technology company, based in Dereham. Ryan approached the council last year with the idea of creating the app to help promote local attractions and businesses. The council backed the development of the app as part of its Market Towns Initiative, which delivers a range of projects helping the district's market towns and businesses to grow and thrive.

Ryan Baxter, from Viewing Online, said: "There are some fantastic places to visit in Breckland and we wanted to show the world just how amazing Breckland really is. In the app, our 'virtual reality' films showcase Breckland while 'augmented reality' technology provides entertainment through the treasure hunt and offers while you're out exploring.

"We spent the summer filming towns, attractions and places of interest across Breckland and discovered places that we'd never heard of before, despite living in Dereham for years. We hope people will use the app to plan great days out with their families and discover some brilliant places to visit and have fun!"

While filming with businesses in Swaffham, Ryan was put in touch with legendary actor, presenter and comedian Stephen Fry who was excited by the concept and agreed to voice some of the short films, including the app's introductory film which guides users through the app's functions.

"Stephen has strong connections with Swaffham and is known to be very tech-savvy, so to have him involved is incredibly exciting!" added Ryan.

Breckworld is a free app and is available in the Apple App Store now. More information at www.breckworld.com.