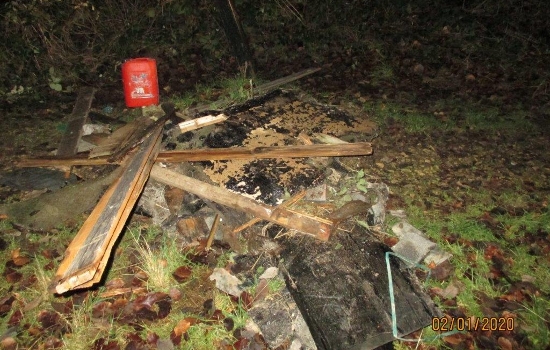 A Thetford man, who fly tipped a substantial amount of DIY waste within Thetford Forest, has been fined £600 by Breckland Council for fly tipping and operating without a waste license.  The extensive fly tip site was reported to Breckland Council's Enforcement Team by the Forestry Commission. The council's staff led an in-depth investigation, including analysing local CCTV which showed the culprit fly tipping fencing panels and other DIY waste using his work vehicle.

The Enforcement Team spoke with the culprit's employer, who confirmed that it was their vehicle being used and that the employee had asked to borrow it outside of working hours for personal use. The driver gave a full confession and confirmed he had transferred waste from his home address to another part of the district illegally, using his work vechicle without permission and without the relevant waste carrier's licence or notices. Faced with the CCTV evidence, tracking records and a full confession, Breckland Council issued a £600 fixed penalty notice, which could rise to £700 if not paid within 10 working days. The Forestry Commission, who own the land, are also considering further action to reclaim the clearance costs.

Cllr Allison Webb, Executive Member of Housing, Health and Environment at Breckland Council, commented: "I am delighted to see, through working in partnership with the Forestry Commission, we have been able to track down and fine another reckless fly tipper who left a trail of DIY waste and wildlife destruction in the heart of Thetford Forest. Residents are simply fed up with this behaviour, which is simply inexcusable when alternatives for disposing of waste safely and legally are readily available. I hope this sends a clear message to anyone considering illegally dumping waste that fly tipping and littering in our community is not going to be tolerated."

Breckland residents can report any fly tips incidents at www.breckland.gov.uk/flytip