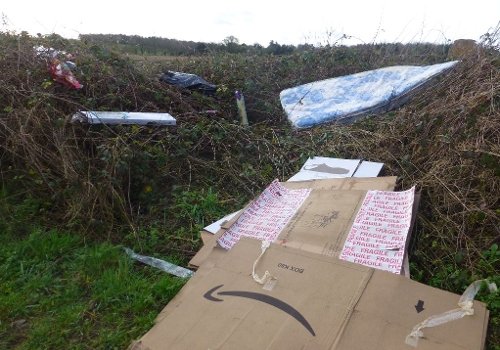 A Diss man, who dumped a substantial amount of domestic waste close to scenic fishing lakes in Swanton Morley, has been fined £300 by Breckland Council for fly tipping. The fly tip was reported to Breckland Council's Enforcement Team by a member of the public, who came across a mattress, cardboard boxes and other household waste thrown into a long hedgerow.

The council's Enforcement staff conducted an in-depth investigation, finding significant evidence leading them back to the original owner, who was in the process of moving homes. They found that the fly tip was carried out by a family member without his permission. The waste owner refused to name the family member who was responsible and instead accepted a £300 fine as the legal owner of the waste. If the waste owner does not pay the £300 fine, within 10 working days, this will then rise to £400.

As a result of being faced with his destructive actions to the local environment by our Enforcement Team, the remorseful waste owner has agreed to remove the rubbish from the hedges and dispose of it legally at a recycling centre, where the waste would have previously been accepted for free and recycled correctly.

Cllr Allison Webb, Executive Member of Housing, Health and Environment at Breckland Council, commented: "It is simply heart breaking to see the damage to the local environment through this reckless fly tipping. Our Enforcement Team are out investigating daily and ensuring those who are responsible are brought to justice. Once again we have identified a fly tip where the waste could have simply been taken to the recycling centre for free. Now the waste owner has a £300 fine, which I hope will make him reflect in the future and understand that Breckland residents and the district council will not tolerate fly tipping."

Breckland residents can report any fly tips incidents at www.breckland.gov.uk/flytip