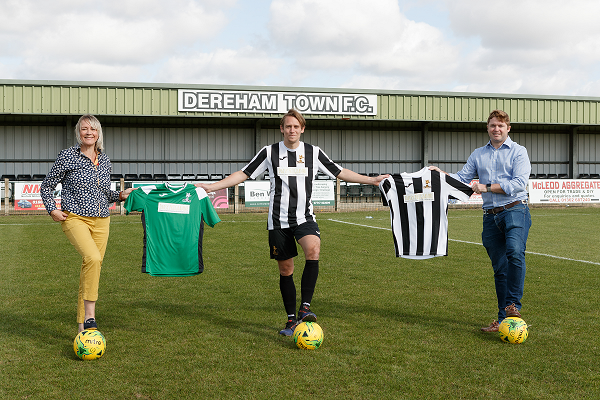 In a ground breaking move for a football team, Dereham Town FC has teamed up with The Daisy Programme and Breckland Council to help survivors of Domestic Abuse reach out and access local support services.

The Daisy Programme, a Breckland based Domestic Abuse support charity will have their logo feature prominently on the 1st team home and away shirts, as well as club tracksuits for the 2020-21 season, and the clubs' players, committee members, and all 60 members of DESA (Dereham Education and Soccer Academy) will  access  domestic abuse awareness training to help start a conversation around this sensitive topic.

This new affiliation is one of very few such agreements between a charity and a high profile sporting club. However, it reflects strengthening relationships being forged between Domestic Abuse charities and football clubs, with Norwich City FC's link to the Norfolk Domestic Abuse and Sexual Violence Board (DASVB) already having been established. The Premier League has also recently held a remote Domestic Abuse workshop for all 20 clubs to help spread awareness of how to tackle Domestic Abuse across the country.

Breckland Council Leader, Sam Chapman-Allen commented "Dereham Town FC is leading the way and setting a fantastic example of the impact that sports clubs can have on the local community, beyond the playing field. Their commitment to the Daisy Programme to raise both awareness of such a serious issue, and valuable funds for their cause, is everything we wish to see realised through the partnerships we make in addressing local vulnerability."

Programme Director, Leigh Taylor for the Daisy Programme said, "We feel this is something that can really help make a difference, get our message out in the community and start those difficult conversations.  The stigma around domestic abuse is still there.  By raising awareness and talking about this hidden problem in society we will work to make a conversation about domestic abuse an acceptable one.  This really is teamwork.  Our new partnership with Dereham Town FC will help us to take a massive step forward and help change, educate, and potentially save lives in our community.  We also feel that Dereham Town FC have taken an enlightened view on domestic abuse which is refreshing and it is fantastic they are showcasing our work whilst supporting the local community, it's a real win win."

Dereham Town Chairman Ashley Bunn explained: "We are really proud to be making this commitment to raise awareness of what is a really serious issue. We have been in conversation with Breckland Council for some time about how we can become more involved with the community and make a positive impact, so when we heard about their vulnerability program and the fantastic work being undertaken by the Daisy Programme as part of that, we were keen to get involved."