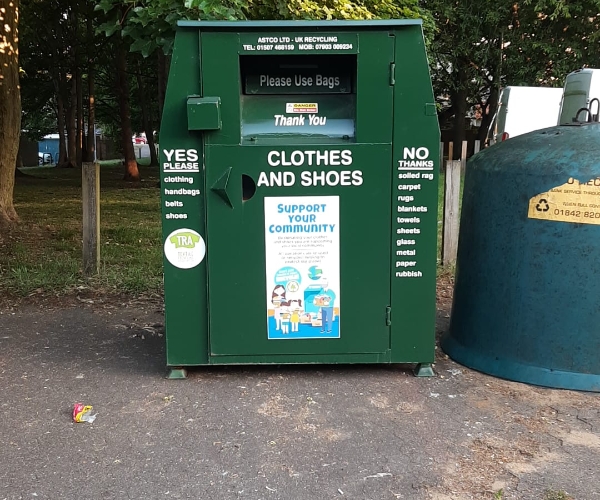 Breckland Council has installed a new textile bank on an estate in Thetford as part of a pilot aimed at helping residents reduce waste in their household bins while also tackling fly-tipping.

The textile bank has been put in place on Exeter Way and will make it easier for people to recycle their textile waste, including clothes, shoes, and belts. It is hoped having this option to hand will also help reduce fly-tipping in the community, as the area has previously been a hotspot for textile fly-tips.

Cllr Ian Sherwood, Breckland Council's Executive Member for Waste, Environmental Health, Licensing and Sustainability commented: "We hope these new banks will help reduce the amount of material being disposed of in household bins and make it easier for residents to dispose of textiles correctly and encourage recycling. This is part of our commitment to supporting communities and enhancing the environment. If the pilot proves successful, we will consider installing similar provision in other areas too."

Cllr Mike Brindle and Cllr Susan Dowling, members of the Thetford Priory Ward, added: "It is really encouraging to see these facilities going into our local community. The textile bank has provided accessible ways for residents to responsibly dispose of their waste."

Breckland's Environmental Services team are working closely with communities, speaking with residents, and raising awareness about the impact of fly-tipping and littering on the natural environment and how they can legitimately dispose of waste.