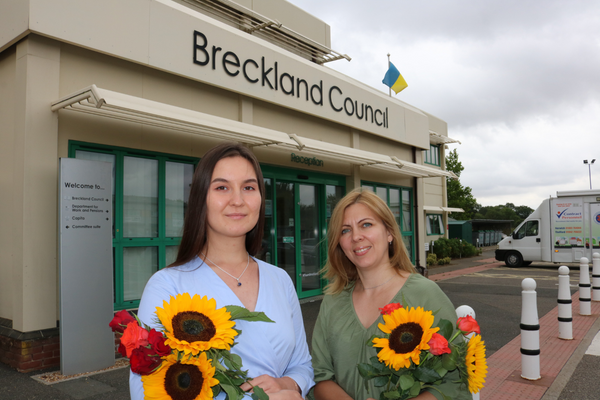 Breckland Council is reiterating its ongoing support for the Ukraine and refugees who have relocated to the district, as the country marks both Ukrainian Independence Day and the six-month anniversary of the invasion by Russia on Wednesday, 24 August.

The council will be lighting its head office in the blue and yellow of the Ukrainian flag to show its solidarity, and is taking the opportunity to remind guests of the help that is on hand for those affected.

Breckland residents are also being invited to show their support, by placing a sunflower in their window at home as it is the national flower of the Ukraine.

Independence Day of Ukraine is the main state holiday in Ukraine and is celebrated on 24 August each year, in commemoration of the Declaration of Independence from the USSR in 1991. In Ukraine, the day is often filled with street parades, music concerts and public celebrations.

Since the start of the war in Ukraine with Russia on February 24, Breckland Council has welcomed almost 100 Ukrainians to the district, including around 40 children, who have found temporary homes with around 50 hosts in the community.

The council has been providing advice to the refugees on how to get a job locally, travel and financial assistance, access to education opportunities, and signposting them to local support services and charities who are offering further bespoke help. The council has even recruited native-speaking welfare officers to provide the best possible support to refugees in the district. In addition to support from the council, Breckland refugees have also received free swim vouchers and bus passes from local companies to help welcome them to the district.

Cllr Sam Chapman-Allen, Leader of Breckland Council, "As part of our continued support to the Ukrainian people and local refugees Breckland Council are illuminating our Dereham office in the colours of the Ukrainian flag. We are also encouraging residents to show their support by displaying an image of sunflowers, the national flower of Ukraine, in their windows. We want to send a clear message within our community, and further afield, that everyone in the UK stands with the people of Ukraine at this difficult time."